Ode to the Scribe Or Why Being a Writer Sucks, Sometimes

I didn’t always want to be a writer. I just knew that there were words bubbling inside of me that I wanted to catch. Sometimes I would grab a pen and write them down, sometimes I would dance with them in my mind, and other time I would craft them into a poem, or a story, or a phrase.

Along the way I tried to get away from writing. I wanted to be a fashion designer, a movie director or a stylist to the stars. But something always drew me back.

I have come to the unfortunate conclusion that I am, as it turns out, a lowly scribe sent to document the stories of others, observe and capture the world and try to process it all into small manageable bites. I am not doing this by choice, I am doing this because it is a burning need inside of me that needs to be fulfilled, a creative itch that needs to be scratched. 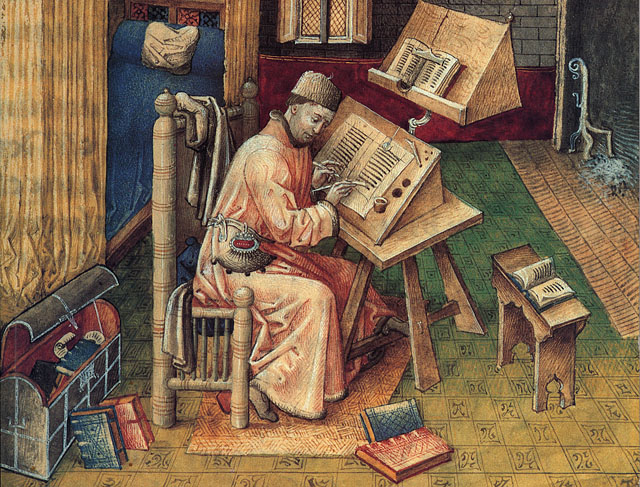 I’ve often wondered how scribes have felt over the years. The poor Joe Schmo that took the position as the first scribe to the Royal Court in the 14th Century. I can imagine it now:

“Hey, can you write in, like, Latin and stuff?”

And there he sat, curled up, cringing over his little scraps of paper with his long feather and his ink pot as he tried to write down all the words of the day. As he tried to capture it all.

Poor Joe Schmo. His eyes probably faded overtime as he winced to write as small as he could. His back and shoulders were probably burdened by the terrible posture he acquired to speed up the writing process. He probably pined over the words, looked over it to make sure it was perfect. And after all that the courts would read over it once, tell him he did a great job and promptly toss the papers into a pile of identical papers never to be touched again.

Cut to the 20th Century when American journalist Daniel Pearl found himself in the middle of the story he was writing, a quick blur between realism and fiction, and instead of reporting the news he was suddenly the subject of the news. On the way to an interview with a Muslim leader he was kidnapped, held for days and tortured before ultimately being beheaded live for the world to see. What was the poor, lowly scribe, thinking in his final days? What did he want to write down? If we could only see the words he wanted to share.

Although these are extreme examples the lowly scribe still exists today. He or she is probably curled over her computer right now, or out there in the middle of the action, stepping over yellow police tape, staring at the lifeless, bloody body in the park. The writer is probably lying awake somewhere, words floating in the air, jumping from the bed to write it all down. The lowly scribe is interviewing someone as we speak, trying to get to the good stuff: the fragile, gooey inner story that everyone has but mostly guards with a precious lock and key. The scribe is writing a poem, feeling the words flow freely into a beautiful dance. Or inventing characters, becoming friends with them, and then killing them quietly as they sleep.

I’ve been given the advice to not get attached to my words. Don’t get invested in them because they will only be edited.

But I can’t listen to this advice!

I like to dance with my words. I like to make them twirl, and spin and move. In many ways I build a relationship with my words, they exist somewhere forever on a page. I can look at them and move them around, I can place them perfectly in the spot on the page where they were always meant to be.

And yet each and every day these words, my words, our words, are sent to the gallows. Who will make the cut? As the critics emerge from the shadows will your words survive?

Everyone thinks of themselves as a writer. But not everyone is a creative writer. The critics and the editors are not interested in your passions. They are not interested in the word dance you just created; the word dance you spent hours delicately perfecting. No, they hold a large axe. They want to chop. They are professionally trained word killers.

Sometimes when my words go to the editors they come back with a pretty pink vest. Other times they come back ugly, disfigured, mutated, a far cry from the word dance that I originally created.

And that is the part of being a writer that really sucks.

That, and then of course, there is the physical pain of it. Being a writer can really take a toll on your body.

Today I was getting a massage and I realized- wow being a writer is kind of like being a caveman. I am constantly in the “fight” stage of the “flight or fight” reaction. Oh no, I did not flee (like I should have). Fleeing would mean  missing all the action.

Writers, just like cavemen, are much too interested in exploring the world to be concerned by the real danger of it all. Writers are ready to put their lives at risk to capture the story, to tell the grandkids and the great grandkids what happened. To make sure that somewhere in some dusty, old history book there is a documentation of what is happening here and now.

God bless the Daniel Pearls of the world. The journalist and writers and lowly scribes that want to cherish the story and cherish the word.

And although there is room for editors and critics and fashion designers and hair stylists, I would like to take a moment to make you aware of all the scribes out there in the world. The poor, lowly, Jo Schmo that wrote the article in your morning paper (yeah, that guy, do you even know his name?) Or the awesome chick that came up with the screenplay for your favorite movie (do you know her name?) Or the completely underpaid and over-passionate blogger you catch up with every now and then (hm, maybe you know her name).