The Blue Hens of Russel C

They say the best way to write your own blog is to get inspired by reading the blogs of others. I have to admit I have become a little bit of a blog junky. Who knew there were so many eloquent, witty, remarkably hilarious people in this world? Can we be friends in my head?

Today I was reading this blog and literally LOLing (I know I use lol a lot but this time I was really loling like more like ROFLing):

In the blog he speaks of his college years, what they were like, the memories he had. It got me thinking about my own Blue Hen days wondering around the University of Delaware, sometimes in sub degree temperatures to make my way to Memorial Hall for an 8 a.m. Shakespeare. Oooh 8 a.m. Shakespeare, how I despised you. I mean we all love the Bard but I don’t think any of us were loving the Bard before the sun was up.

And then there was freshman year, what a joyous time. The world was our oyster and we felt like the coolest kids ever.

SSOOooo where was I?

Oh yes, ‘break the ice’. So our Russell Fellow (it sounds so dorky saying that) was a guy named Billy and we all loved him instantaneous because seriously, what is not to love about him? He was dorky and sing-songy and filled with positive energy. He sat us all in a circle and told us we would be playing a game to remember each others names. I think there must have been about 20 of us, maybe more. The thought of remembering everyone’s name made me want to throw up with anxiety.

The aim of the game was to say your name and an adjective of the same letter as your name that would best describe you. For example: Joyful John.

So as people went around the circle you had to say your name, your adjective and the people who said their names before you.

We went around the circle:

Crap, crap, crap. It’s going to be me next, what do I say? Sexy Suki? Sarcastic Suki? Sweet Suki? Uugh I don’t know!

I don’t even remember what I said but I believe it was something lame. But some of the above names stuck and I will always know Steve and Steve as Stylin’ Steve and Super Steve for as long as I live.

Freshman year was such a bonding experience for all of us. We were thrust into a new world together, a world where we thought we were adults when we were really just beginning to understand what it meant to be an adult.

Erin and I were poor as church mice so we didn’t have the fancy gidgets and gadgets that everyone else had but we made our tiny 7 by 12 cell work. Erin’s side was filled with her artwork, teddy bears and colors. My side was covered in pictures of friends and family, clothes and products. Some things never change. 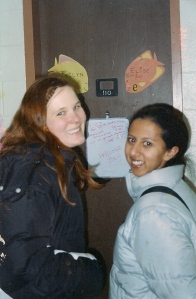 At night our crew of ChemEs, honors and misfits would gallivant around the town looking for the nearest keg party. You can always tell who are the freshman because they move in clans of 10 or more. When we would find one we would drink piss cheap beer and get buzzed. Once in a while we would stumble into a Frat party and I vowed that all men were the vile scum of the earth.

During the days we would pile onto one big uncomfortable dorm room bed and share stories.

Relationships on the floor began developing instantaneously. We all imagined these relationships would last forever, that someday we would be going to their weddings. They did not.

But when it came to saying goodbye it was a bittersweet moment.

We were moving on to better digs, nicer dorms and elevated statuses on campus. And yet, we didn’t want to leave each other. We had become quite a family, and just as dysfunctional.

When I left Russel C (that was our dorm) I never really said goodbye to all those friendships because even though we have changed and even though we may all be living far apart, the memories we shared together that year will live on. And we will always remember that first year as the Blue Hens of Russel C.