With Liberty and Justice For All

Healthcare is a fundamental Human right. America spends hundreds of thousands if not millions of dollars on medical aid overseas but practically has to fight a war on our soil to pass a healthcare bill that will provide neccessary medical aid to our people. I thought that our country was founded on the belief of equality and justice for all- but this whole healthcare debate has questioned my beliefs. 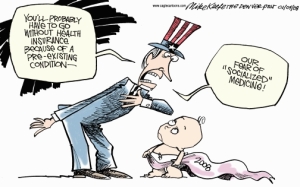 What is there to debate?

Do we debate over whether everyone should have access to clean water and food? Do we debate that?

And yet people in Africa go every day without food and walk for miles and miles to fetch dirty water from a dirty river filled with bacteria and mud.

Why do we need to debate what is right?

You don’t have to ask me for two dollars so that everyone around me can eat. I won’t even think twice. Would you?

Let’s say we were in a severe drought. You had a loaf…an entire loaf of bread. Would you share it with the starving around you? Or would you find yourself hiding in a cave, eating the whole thing yourself.

The thing that really gets me about healthcare is it is the SAME thing. If you saw a man bleeding on the street would you walk away? Or would you help? What would you do?

My father was in hospital a few months ago. He did not have health insurance.

Do you know the cost of a BED in hospital without health insurance in this country? Do you have any idea?

Also do you know that if you have a “preexisting condition” you will be denied healthcare coverage?

My best friend found a precancerous growth when she was in her early 20’s. Because she didn’t have health insurance she tried to find an insurance company that would help her.
They all turned her away.

‘I’m sorry we can’t treat you, you have a preexisting condition.”

What is a preexisting condition?

Tell me that you don’t know at least ONE person with one of these afflictions?!
Should we turn these people away?

WHY? Because then the big fat insurance company CEO can’t take another vacation to Puerto Rico. Is that why?

I’m so happy to see this day come. When we can treat other people as humans.

Thank you President Obama for pushing this issue. Something needed to be done.

Parts of the bill you should know about